Article by the Asia Society 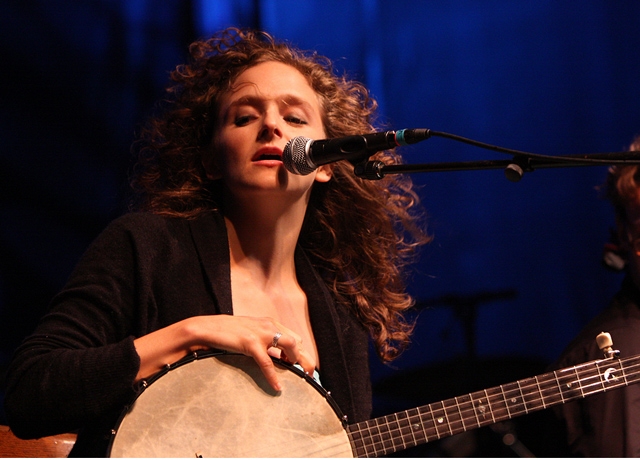 The Nashville-based singer and banjoist Abigail Washburn has become as one of the country's most acclaimed folk artists, most recently collaborating with husband Bela Fleck to produce lively, touching American roots music. Their most recent album, entitled Bela Fleck & Abigal Washburn, was duly recognized on Monday night with the 2016 Grammy award for Best Folk Album.

For a musician known for her explorations of Americana, Washburn has deep roots in China: The 38-year-old is a fluent Mandarin speaker who has performed in a variety of settings throughout the country. In 2014, Asia Blog's Eleise Jones recounted how Washburn's ties to China actually predated her musical career:

As a student in the late 1990s, Washburn majored in East Asian studies and Mandarin, spent time in China, and was soon ready to pursue a degree in international law at Beijing University. But then she encountered American bluegrass music, unearthed a new talent, and auspiciously rerouted her career. Now a fixture on the Nashville music scene, she has since toured in China and frequently collaborates with Chinese and American musicians, in addition to performing solo and with her husband, banjo virtuoso Béla Fleck.

Leah Thompson, the former Assistant Director of the Center on U.S.-China Relations, earlier recounted a collaboration between Washburn and Coal + Ice, the documentary photography exhibition Thompson produced for Asia Society, in Anhui Province:

Our festivals in Anhui were cancelled by the local government, but we had already installed our exhibition and we managed to hold a makeshift festival. Abigail performed a set of coal mining songs for a small group of guests and participants inside the Ming Dynasty-era ancestral hall where Coal+Ice was exhibited, and we also recorded a few songs in the space, Sarah Ogan Gunning's “Come All You Coal Miners” and Jean Ritchie's “Black Waters.”

Watch a video from Washburn's performance in Anhui Province here: