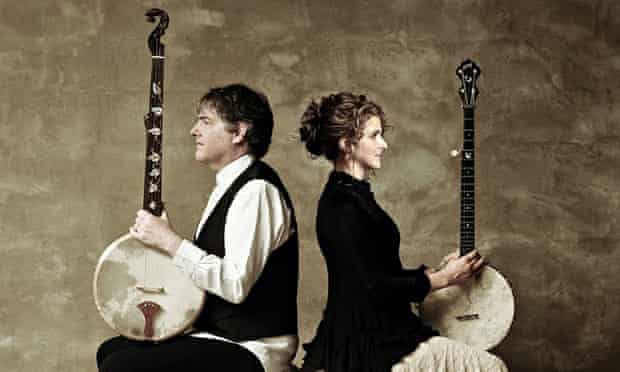 Béla Fleck and Abigail Washburn are partners on stage and off -- husband and wife, entwined in life's ultimate duet.

"There's just all these ways we know each other," said Washburn. "In the music we can anticipate things, beautifully, 'cause of each other's intense knowledge, and comfort with the other person."

"And if you decide to do something that's a little bit different," said Osgood, "you're counting on the other person to hear it, and make the shift as well."

Indeed, musicians will tell you a duet depends on how closely each partner listens to the other.

Could it be a coincidence that marriage counselors offer up the same advice?

"I've had some people tell me you should never be in a musical group with your wife -- it's gonna be a mistake, and you'll ruin the relationship," said Fleck. "But it's not like that for us. We know each other better through music."

Béla Fleck is considered perhaps the greatest banjo picker alive, with 15 Grammy Awards to his credit.

It may sound hard to believe, but back in the 1990s, Fleck and Osgood studied under the same teacher, Tony Trischka. (Let's just say Béla put in a bit more practice than the "Sunday Morning" host did.)

And to think, Fleck started out as just a kid from New York City who happened to enjoy "The Beverly Hillbillies."

Listening to Earl Scruggs play banjo on "The Ballad of Jed Clampett" propelled Fleck into a lifetime of breaking new ground with the instrument, from the jazz explorations of his band, The Flecktones ... to a journey across West Africa, where the American banjo traces its origins.

He has even composed and performed a banjo concerto with the Nashville Symphony.

But Fleck isn't the only member of this duo to take the instrument far afield. Abigail Washburn, who was born in Illinois, is something of an unofficial musical ambassador to China. She constructs cultural bridges, one note at a time.

Remarkably, Washburn only picked up the banjo 15 years ago. At that time, she was about to enter law school, in China. Ultimately, she chose banjo over Beijing. But she can still belt out a tune in fluent Mandarin.

A revivalist of the old-time "clawhammer" style, Washburn's steady strum is the root from which all sorts of melodies blossom.

Fleck and Washburn have been touring on-and-off for the past year, making a home for themselves and their young son, Juno, in their tour bus.

"We're both so busy between trying to handle the business of the career, along with trying to be really present for Juno, this little, little person who needs tons of attention," said Washburn. "When we finally get backstage, ten minutes before the show, we look at each other and go, [sighs], you know?"

"It's a really fun time for us. It's sort of the first moment in the day that we look at each other and go, 'This is our time,' you know? It's funny that it's in front of a bunch of people! But it works out really well for us."

The sound is timeless -- two individuals, blending into one.

No relationship is perfect, musical or otherwise. But when Béla Fleck and Abigail Washburn play together, it feels like the whole world is truly in tune.

"It is a joyful sound," said Washburn.